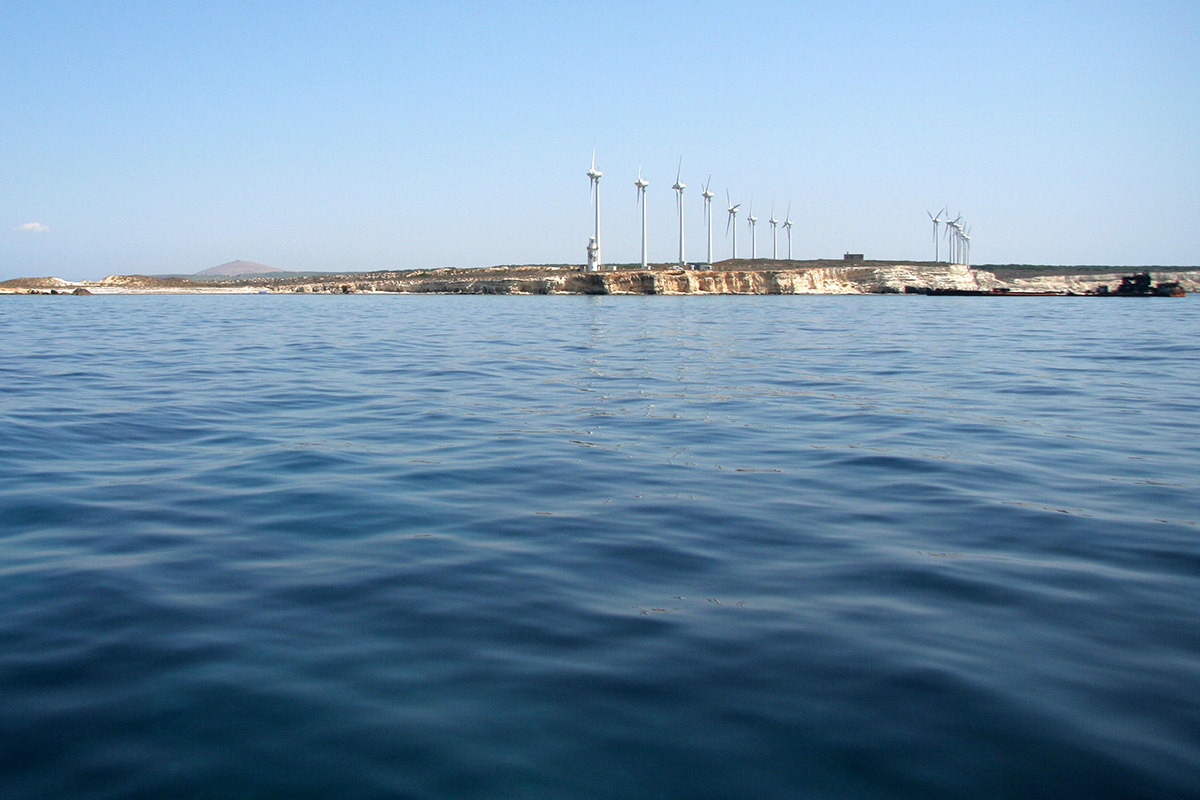 Perhaps the sunset that is waiting for you at the west end of the island is going to be the most fascinating sunset you’ll ever see in your life. In front of you lies the boundless Aegean, beside you are the wind turbines standing with grandeur, and a deserted lighthouse. It smells of wild thyme and the island wind caresses ones face…

To end the day by visiting the West point has become a custom in the island. There is a smooth road where you can drive past the wind turbines and reach the end of the cape. Some take their picnic baskets, others just a bottle of island wine as they take their places facing the setting sun. The compass wind turbines that turn all day long by themselves and the Polente lighthouse that has gotten used to being alone are surrounded by an excited crowd all of a sudden.

The cape is filled with a new kind of beauty as the sun sets. There is no sign of habitation around, so no artificial lights. In the darkness, the bright stars are easily seen. You have never seen so many stars together before, the giant wings of the wind turbines that turn with a whisper and the only flashing light, that of the lighthouse, creates an even more effective atmosphere.

The wind turbines that started generating electricity in 2000 constitute the third wind power station of Turkey. The energy generated here is 30 times more than the island’s consumption. Electricity with a capacity to serve 30.000 people is sent to the mainland under the sea. The oxygen conserved by producing this energy here rather than in a coal generator is equivalent to the oxygen produced by 82.000 trees per tribune. This means 17 turbines save a forest of 1.400.000 trees. Only one turbine is enough to meet the energy needs of the island.

The team that runs the power plant has given a woman’s name to each turbine, perhaps because of their elegant postures. Their use of these names among themselves when they refer to the turbines gives each a kind of personality. When you hear that Ayse is “ill”, you also begin to worry.

As you approach the island by boat, the first site to attract your attention will be the imposing, majestic castle...

The ferry from Geyikli arrives at the town centre, which is the most densely populated part of the island.

A monastery found in the south of Bozcaada belonging to the Christian congregation.

Goztepe, which is the highest point (192 m.) on the island, has an impressive bird’s-eye-view of the surroundings...

There are six wineries on the island. .

Perhaps the sunset that is waiting for you at the west end of the island is going to be the most fascinating sunset you’ll ever see in your life.